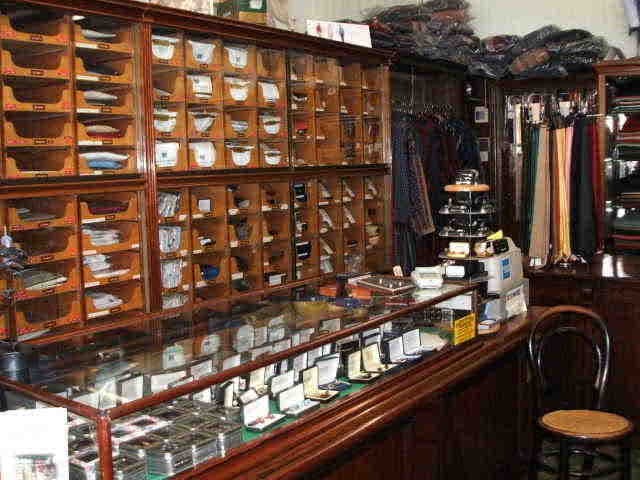 Edwin Smith, his wife and family came to Bridport in 1884, and started a tailoring business in South Street, next to the Methodist Church (now the Bridport Art Centre). Sadly, when Robert, the eldest child was just 15, his father died, followed by two siblings, leaving just Robert, Stanley and a sister Mabel.

Mrs Smith continued the business and Robert was sent away to learn the tailoring trade. When he returned, his brother Stanley was sent to London (to Huntsmans) also to learn the trade.

When he returned the two brothers took over the business from their mother, and formed Smith & Smith, still in the same location.

In 1923 they moved to larger premises at 8 West Street. Mabel, had by now married Jack Bedingfeld, and they moved into the South Street premises opening a chemists shop.

Smith & Smith continued to flourish, and in 1936 Donald Wraight was appointed to run the outfitting side of the business. He had been an apprentice in Wantage, Oxfordshire, and then gained further experience in Oxford.

Just before the outbreak of war in1939 Donald, a member of the Home Guard, joined up, and became an instructor at the R.A.M.T.S., where he remained for most of the war.

After the war he returned to Smith & Smith and joined the social life of the town, playing hockey, and taking part in amateur dramatics and the local Operatic Society. In the spring of 1953 he became engaged to Sheila Hine whose family had a stationery and printing business in the town. Sadly, two weeks after their engagement Stanley Smith died of a sudden heart attack, leaving a widow and son neither of whom were interested in continuing the business. Robert Smith, with Donald Wraight’s help kept the business going, but the loss of his brother affected him deeply, and in the following October he also died.

The business was left in the hands of the executors, and the bespoke tailoring finished. The outfitting and ‘cut, make and trim’ continued to flourish and after prolonged negotiations, and with the help of Sheila’s father, Eric Hine, a company, Smith & Smith (Bridport) Ltd was formed, and has continued in the same family until the present day.

After many years, when there was a recognized need in Bridport for good quality ladies' clothing, a small corner of the shop was found to sell ladies' wear, which proved successful. Structural alterations were made, and a new staircase was put in, and the Ladies' Department opened.

In February 1985 Donald had a heart attack, and died a week later. Sheila took on the responsibility of the business, with help from Sue, who had worked in the shop until the birth of her first daughter.

As the business grew, a further extension was made to the showroom, and as her daughters grew up Sue was able to spend more time in the shop, which she now runs, as Sheila has retired.

In  2009 - we proudly celebrated our 125th anniversary of trading. We decided that a  'Garden Party' would be nice, so we gathered together as many ex-employees as possible and had a small gathering in Sheila's and Jane's garden. We managed to find a lovely lady who had been a seamstress in the days of 'Bob and Stanley' and who told us some very entertaining tales of the bygone days. Also there was a gentleman who had been a delivery boy on his bicycle in his teenage years.

In 2014, we celebrated our 130th anniversary. We are very proud to have reached this milestone.

Over recent years fashions have changed considerably, but our attention to customer service is still of paramount importance, and we are justifiably proud of our fine reputation not only in West Dorset, but far beyond.